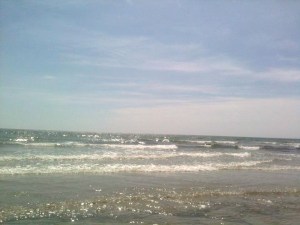 I had a disaster in my kitchen today. I was lifting down some big Pyrex mixing bowls from a shelf, something I’ve done dozens and dozens of times. Something I do almost every day. I was lifting them down to put one back in the stack. As I brought the stack down to the counter, suddenly I heard a crash. I think I heard it before I realized what happened. One moment I was lowering the bowls to the counter, then next moment I had no bowls in my hands and there were millions of pieces of glass covering every inch of my kitchen counter, floor, and my feet.

I was shaking, so I just stood there for a minute while I took stock and tried to breathe. I know that cuts don’t hurt at first, so I was looking for blood to see how bad the damage was. Unbelievably, all of the cuts, and they were few, were superficial.

The damage to the Pyrex was worse: My 2 favorites bowls were broken: the large yellow and the large Amish.

I told my daughter and her friend to stay in her room. I realized my son was home so I called him. “I need help.” He said, “Give me a minute,” then came up, looked around, asked me if I was okay, then got to work. I would like to say that he helped me clean it up, but really, he cleaned it all up while I picked up shards of glass then put them back down again, still too shaken up to do much at all.

I thought of all that while I was walking on the beach later on this morning. I looked at the ocean and thought: The ocean makes everything better.

I was wrong though. After a few moments, I realized this: Family and friends make everything better.  I lost nothing. I have everything.

3 thoughts on “After the fall”