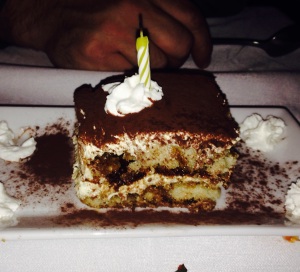 I took a two-day break from Nano writing and went away overnight to celebrate my husband’s birthday (and, you know, to take a break from sitting! At the computer! Writing! OMG! I haven’t been able to feel two of the fingers on my left hand for a week!).  We had supper at Nolita,  a new-ish Italian restaurant in York that we like.

I felt a little bad that he hadn’t had a cake on his birthday and gotten to hear the sweet strains of the “Happy Birthday to You” song wafting toward his ears on his day, but so be it. We wanted to have the cake with the entire family, and that couldn’t happen until the following day.

When we arrived at the restaurant, my husband had to run back to the car to get his reading glasses (he is so not into my rendition of “This is what’s on the menu” that he’d rather run back out into the 27 degree cold dark night that to listen to it).

That’s when the waitress came over and I mentioned it was my husband’s birthday. She said, “Does he like tiramisu?  We give a free tiramisu for someone’s birthday.”

Now, Bill does not like tiramisu, but oh my God! I love it!  But, it was his birthday after all, so I asked if there were other dessert options and she said they have gelato. As (my) luck would have it, I’m pretty sure the only thing he dislikes more than tiramisu is gelato.

“Yes, he does like tiramisu! Bring that!” I said, conscience clear.

What I hadn’t realized (and in fairness to me, I was halfway through my Italia Margarita at the time) was that said tiramisu would be accompanied by, um, fanfare. And I’m pretty sure that if there is one thing Bill dislikes more than gelato and tiramisu, it’s fanfare. In our 26 or more (we can’t agree on this) years together, he has never, ever seen a cake coming toward him with a gaggle of servers singing the birthday song to him.

And yet, I lived to tell the tale, so it’s all good.